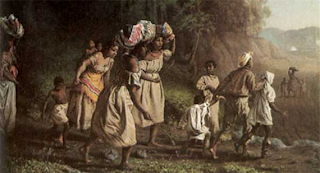 Escaping wasn’t easy. Slave owners observed every move, every motion slaves made. Slaves had a way of getting their freedom, which was using the Underground Railroad. This wasn’t an actual railroad and it did not travel underground.  It was a secret pathway and safe houses slaves used to escape from the South, where slavery was legal, to the north, where they could be free. However slaves knew they were risking their lives, and running away was a crime. A slave who ran away once would receive a terrible beating, punishment by their slave owners. They did this to remind other slaves to not attempt to leave the South. The second or third time a slave would be punished with death. The South was full of security, it was watched by police and slave catchers. They wanted to make sure their slaves weren’t trying to escape; they had to secure the area, and look out for any slaves. A slave that had no idea of where he was going, or didn’t have the right place to hide were usually caught within a day or two of running away from their plantations. It was difficult to escape, and the consequences they will have to face if caught by one of the slave catchers were terrible.


http://www.misterteacher.com/american%20slavery/introduction.html
Posted by duma7234 at 8:33 PM